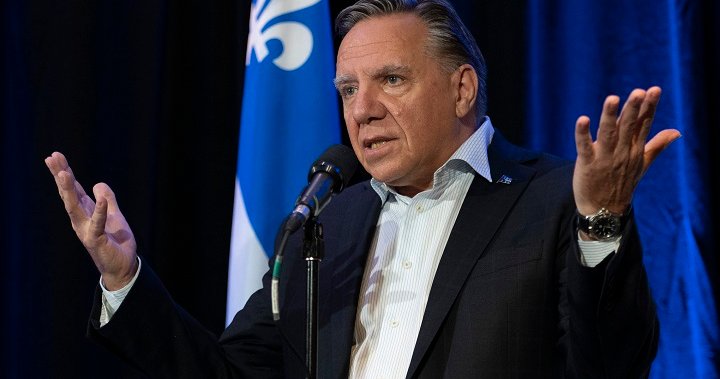 Quebec’s premier and education minister on Friday condemned anti-vaccine protests taking place outside Montreal high schools this week as the province reported its highest daily COVID-19 case count since May.

“It’s unacceptable to see the anti-vaxxers getting our children involved in their fight,” Premier François Legault told reporters in Quebec City. “Please, get our children out of this debate.”

Education Minister Jean-François Roberge spoke out against what he called the intimidation of children and school staff by anti-vaccine activists.

Earlier in the week, a small group of anti-vaccine protesters outside Louis-Riel high school in Montreal urged students not to get vaccinated, spouting false conspiracy theories that the sudden death Tuesday of a Grade 10 student at the school was a reaction to vaccination.

The 15-year-old girl’s family told the Journal de Montreal she in fact had an existing heart condition and had been fully vaccinated against COVID-19 since June.

Roberge said it was irresponsible of demonstrators to use the tragic death of the teen to fuel disinformation. “Going around schools, instrumentalizing children, intimidating children and school personnel, this is unacceptable,” he said on Friday.

Both Legault and the education minister said they’d spoken to Public Security Minister Geneviève Guilbault about ensuring a greater police presence to monitor the situation outside schools.

On Friday, Montreal police were keeping tabs on another anti-vaccination protest at Louis-Joseph-Papineau high school in the city’s northeast.

“The Montreal police are aware of the situation around certain secondary schools on their territory,” the force said. “We take it very seriously and we are monitoring it closely.”

Police declined to grant an interview, but said in a statement they respect the rights of citizens to protest lawfully. They said they are ready to intervene in the event of any criminal offence or at the request of education officials.

On Friday, Quebec reported 879 new cases of COVID-19, the highest number of daily cases in the province since mid-May. The Health Department reported four more deaths linked to the disease, and the number of hospitalizations rose by nine, to 207, with 72 people in intensive care.

2:13
Concerns abound over COVID-19 ‘pandemic of the unvaccinated’

Concerns abound over COVID-19 ‘pandemic of the unvaccinated’

Legault said Friday he is concerned about rising COVID-19 case counts and hospitalizations, saying it’s why Quebec has acted by introducing measures like mandatory masks in schools, a vaccine passport and requiring vaccinations for health-care staff as of mid-October.

“It’s getting worse, not as (bad) as in the United States or Europe, so we have to be very careful,” Legault said.

The Health Department says the number of elementary and secondary schools reporting active COVID-19 cases rose to 564 on Wednesday, the most recent day for which data is available. It says 776 students and 94 school staff members have active cases of COVID-19.

The public health institute says 88.1 per cent of residents 12 and over have received at least one dose of vaccine, and 82.7 per cent are considered adequately vaccinated.

“The vast majority of people in hospitals are people that are not vaccinated, so please, the 12 per cent who didn’t get at least one dose, get your dose,” Legault said.