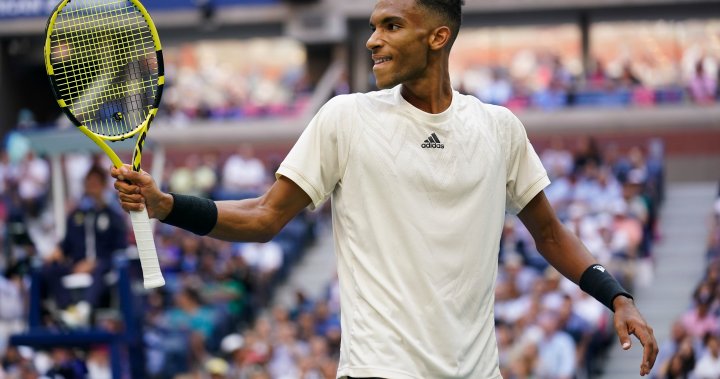 Felix Auger-Aliassime’s dream of playing in a U.S. Open men’s final will have to wait for next year.

The 21-year-old from Montreal lost in straight sets Friday, dropping a 6-4, 7-5, 6-2 decision to second-seeded Daniil Medvedev of Russia.

The loss leaves Canada’s Grand Slam hopes on the shoulders of 19-year-old Leylah Fernandez, who makes her debut in the women’s final Saturday against Emma Raducanu of Great Britain.

“Daniil was the better player on the court today, for sure,” Auger-Aliassime said after the match.

“I had to play at my best level and even better if I wanted to win today, and I didn’t do it long enough.”

Auger-Aliassime, who was seeded 12th, held his own throughout the semifinal against the powerful Medvedev, thanks to crafty play at the net and returns his opponent often sent well past the baseline.

But a string of first-serve misses and double-faults saw the Canadian relinquish several scoring opportunities, especially early in the first set, which Medvedev — who barely seemed to break a sweat throughout the match — claimed easily.

And with a 5-2 lead in the second set, Auger-Aliassime failed to capitalize on a pair of set point opportunities. The Russian fought back to win five straight games and take control of the match.

Even Medvedev himself sounded surprised that he managed to win in straight sets.

“Everybody felt it was going to be one set (each)” after the second, he said, describing the reversal of fortune as a key turning point for both players.

“You never know how a match is going to go,” Medvedev said as he described closing the gap. “That’s the moment I could break him mentally, and that’s what happened.”

Auger-Aliassime committed 39 unforced errors, including 10 double-faults, three of them coming in the opening game. He managed only 17 winners to 37 for Medvedev, who had just 25 unforced mistakes.

Auger-Aliassime became the first-ever Canadian to reach the U.S. Open men’s semifinals earlier this week when Carlos Alcaraz of Spain retired from their quarterfinal match with a leg injury.

But he clearly had his hands full with Medvedev, despite the exhortations of a New York crowd that has demonstrated its affinity for Canadian players throughout the tournament.

“A player like this, you just don’t have room for making mistakes, room for losing your focus, which I did at the end of the second,” Auger-Aliassime said.

“He took advantage of it.”

Fernandez, whose surprising run to the final continued Thursday with a win over Aryna Sabalenka of Belarus, has attributed much of her success to the support of the U.S. fans.

Auger-Aliassime proved a favourite with the crowd Friday as well, particularly those brandishing Maple Leaf flags. “Go get ’em, Felix,” they shouted. “C’mon, Felix. You got this.”

He didn’t leave Flushing Meadows entirely empty-handed, however: organizers presented Auger-Aliassime with the tournament’s sportsmanship award, which goes to the players who most personify the spirit of the game over the course of the series.

Still, he couldn’t mask his disappointment.

“It’s great,” Auger-Aliassime said half-heartedly of what has indeed been a strong season-long performance, one that included his first-ever trip to the Wimbledon quarterfinals, as well as Friday’s semifinal berth.

“The final,” he added, “would have been even better.”

Stefani landed awkwardly near the net during a first-set tiebreaker and injured her leg. Dabrowski and Stefani had a 2-1 edge in the tiebreaker at the time.

It will be Medvedev’s second appearance in the men’s final in three years after losing to Rafael Nadal in 2019. He’ll face either top-seeded Novak Djokovic or fourth-seeded Alexander Zverev, who were scheduled to play later Friday.

Djokovic is trying to become the first man since 1969 to win all four Grand Slam tournaments in a single calendar year. The feat was last accomplished by Rod Laver, the iconic Australian who basked in a heartfelt ovation Friday midway through the match at Arthur Ashe Stadium.