COVID-19: Quebec will suspend unvaccinated health workers without pay as of Oct. 15 | Globalnews.ca 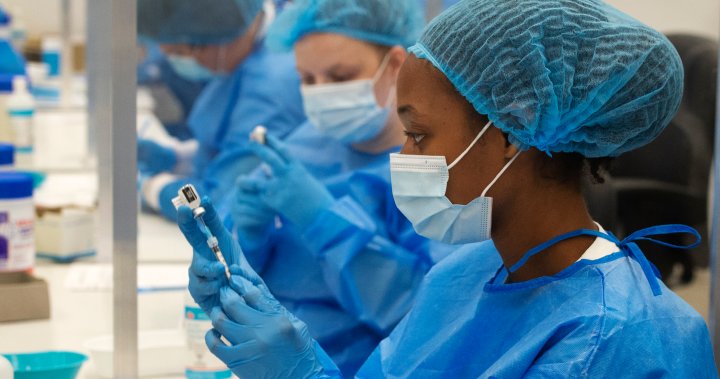 Health Minister Christian Dubé said the measure will apply to employees in the public and private sector — ranging from medical professionals to housekeeping and security staff. It will come into effect on Oct. 15.

“We can’t accept that there are workers who put vulnerable people at risk,” he said.

Visitors and family caregivers will also have to show proof of vaccination to access Quebec hospitals, according to Dubé. Some exceptions will apply to the new rule, such as when someone who is not vaccinated wishes to visit a dying loved one.

The plan comes after the government held committee hearings on its proposed mandatory vaccination mandate for health-care workers last month and as the province deals with a fourth wave of the pandemic.

Quebec had said on Aug. 17 it would require vaccinations only for health-care and social workers who deal with patients for more than 15 minutes, but now the measure will apply to workers who have any contact with patients.

The ethics committee of the province’s public health institute in January said it was better to avoid mandatory vaccination of health-care workers out of respect for their autonomy and freedom of choice. But on Tuesday, the committee said the pandemic situation has evolved so much that a change in its position was warranted.

Dubé said he didn’t want to force workers to get the two doses but that the health network is “already under a great pressure.”

“It wasn’t an easy decision,” he told reporters in Montreal.

The health network is currently facing a labour shortage while also dealing with an increase in COVID-19 hospitalizations, according to Legault. There are enough beds, but there is a lack of nurses in intensive care units.

Quebec has gone to 171 patients from 55 in the past month, he added.

“It’s five times as much,” Legault said, referring to the number of hospitalizations.

0:35
87% of eligible Quebecers have received at least 1 dose of COVID-19 vaccine: Legault

87% of eligible Quebecers have received at least 1 dose of COVID-19 vaccine: Legault

Legault also noted 13 per cent of Quebecers aged 12 and over have not received any dose of the COVID-19 vaccine so far.

The premier encouraged those who rolled up their sleeves to reach out to loved ones or friends who haven’t been vaccinated. Those are who fully immunized are 30 times less likely to be hospitalized, he added.

“We are living through a huge crisis and it’s not the time to fight among us,” Legault said.

—with files from The Canadian Press