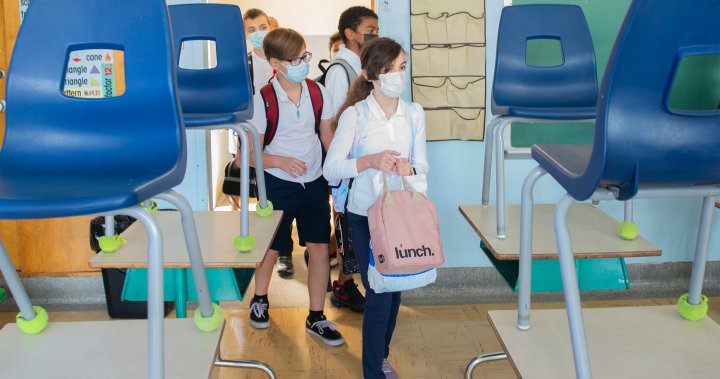 The Middlesex-London Health Unit reported 82 COVID-19 cases over the long weekend, with 12 on Tuesday, 18 cases Monday, 30 cases on Sunday and 22 cases on Saturday.

The most recently recorded death was added to the MLHU’s dashboard on Friday and involved a woman in her early 30s who was unvaccinated.

Medical Officer of Health Dr. Chris Mackie confirmed Tuesday that the case was linked to a “complex multi-site outbreak” associated with Drewlo Holdings from earlier this summer.

“Unfortunately, many people in that setting were not vaccinated. This individual didn’t work in that facility, but was connected through family connections to that outbreak,” said Mackie.

“And there may have actually been another death that was linked through second-hand contact through that outbreak as well.”

The number of cases involving a variant of concern climbed by four to 3,981.

The breakdown of known variant cases is as follows:

There are also two cases listed using the old code numbers, one described as B.1.617 and another listed as B.1.617.3.

Further information can be found on the health unit’s summary of COVID-19 cases in Middlesex-London.

London Health Sciences Centre says it is caring for 11 inpatients with COVID-19 as of Tuesday, an increase of three from Friday. Five or fewer are in intensive care.

When asked why the LHSC will be publishing those numbers, LHSC Chief Medical Officer Dr. Adam Dukelow described it as a “proactive” decision.

“We’ve all seen the impact of the Delta variant on the unvaccinated, including those that are less than 12-years-old around the world and are unable to get a vaccine at this point in time,” Dukelow said Tuesday.

“We as an organization have also had many inquiries from media and otherwise about the number of children with COVID who we are caring for, so we wanted to be proactive by publishing these numbers.”

Six staff are currently positive with COVID-19, the organization reported, up from five or fewer on Friday.

The MLHU is reporting that an outbreak was declared at McCormick Home on Sept. 3. The outbreak is tied to two of its resident home areas: Memory Lane (dedicated dementia care wing) and Evergreen Walk.

While there are currently no outbreaks tied to child-care settings or early years centres, the MLHU says there is one confirmed case of COVID-19 tied to Kids and Company – London.

2:24
Some students return to many Ontario school boards amid 4th COVID wave

In data covering up to the end of day Sept. 4 and released on Tuesday, the MLHU says 77.3 per cent of residents age 12 and older are fully vaccinated and 84.0 per cent have had at least one dose.

The lowest vaccine uptake is among those 18 to 24 with 63.4 per cent fully vaccinated and 73.9 per cent with at least one dose.

Mackie said Tuesday that since the province announced its plans for a vaccine certificate system, the MLHU has seen a “big jump” in the number of first doses being administered.

“I did mention we’ve had a 50 per cent increase overall in in vaccinations since the announcement, but that jump is higher in people who are first time doses. It’s more like 55-60 per cent.”

According to the health unit, all deaths reported in the last six weeks in the region were among people who were unvaccinated.

On the health unit’s website, residents can find information on pop-up clinics, mass vaccination clinics and pharmacies; guidance for anyone vaccinated outside of the province or country; transportation support for those in need; and more.

Anyone looking to be tested for COVID-19 can find information about locations of testing sites on the health unit’s website.

Of the 564 cases reported Tuesday:

According to Tuesday’s report, 114 cases were recorded in Toronto, 87 in Peel Region, 61 in York Region, 55 in Windsor-Essex and 40 in Hamilton. All other health units had fewer than 40 cases.

Three deaths were reported on Tuesday in addition to two deaths reported Monday.

Among those eligible, 77.2 per cent are fully vaccinated while 83.7 per cent have had at least one dose.

The most recent death was reported Aug. 31 and involved a woman in her 80s from Oxford County.

Of the 32 active cases, 10 are in Woodstock, eight in St. Thomas and five in Aylmer. Per-municipality case counts for the pandemic can be found on the health unit’s dashboard.

Two people are hospitalized with COVID-19, with none in the ICU, an increase from zero hospitalizations on Friday.

There are no active institutional outbreaks, the health unit says.

Information on where to get vaccinated, vaccine eligibility and booking and cancelling appointments can be found on the health unit’s website.

Health officials say the mass immunization clinic in St. Thomas will administer its final doses at Memorial Arena on Sept. 10 before reopening on Sept. 13 at a new location at 1230 Talbot St.

People can add their names on a weekly basis to the health unit’s same-day vaccination list, also known as the Cancellation List. Select pharmacies in the region are also continuing to offer COVID-19 vaccine shots.

All three deaths are associated with the ongoing outbreak at Knollcrest Lodge long-term care home.

Of the 38 active cases, 11 are in Stratford, eight in West Perth, and six in Perth East. Case counts by municipality can be found on the health unit’s dashboard.

Seven people were listed as hospitalized as of Tuesday, an increase of four from Friday.

There are three active cases among health-care workers.

As previously mentioned, an outbreak declared Aug. 20 involving Knollcrest Lodge in Perth East remains active and involves a total of 12 cases with seven among residents and five among staff as of Tuesday.

HPPH’s vaccine dashboard showed that as of Sept. 7, 74.8 per cent of residents 12 and older were fully vaccinated while 81.1 per cent have had at least one dose.

Information on how and where to get a vaccine can be found on the health unit’s website.

Information on pharmacies offering COVID-19 vaccines can be found on the province’s website.

2:11
Double heart transplant recipient urges anti-vaxxers to think about others

Double heart transplant recipient urges anti-vaxxers to think about others

There are no active outbreaks reported by LPH. The most recent test positivity rate was 1.24 per cent for the week of Aug. 22, down from 1.41 per cent the week before. Of those 12 and older, 72.8 per cent are fully vaccinated and 78.3 per cent have at least one dose.

Those who are able to get vaccinated on short notice are encouraged to sign up for Lambton Public Health’s daily Vaccine Standby List.

Information on pharmacies offering COVID-19 vaccines can be found on the province’s website.