It was the 69th birth anniversary of late actor Rishi Kapoor on August 4, 2021, and wife and actor Neetu Kapoor left no stones unturned to make it special and memorable. Neetu Kapoor hosted a party with Rishi Kapoor’s close friends and family. The celebration was attended by brother Randhir Kapoor, friends Shatrughan Sinha, David Dhawan and others. Neetu Kapoor shared glimpses of the celebrations on Instagram and it seemed to be a grand affair. But what attracted our attention was the customised cake she got for her husband’s birthday party.

As per Neetu Kapoor’s Insta stories, it was a white fondant cake that had everything the late actor loved. From a mutton curry bowl and whiskey to Twitter and guitar – the cake had it all. And trust us every element looked just-so-real! Take a look at the cake and decide for yourself:

Also Read: Neetu Kapoor Shares Drink For Anxiety Relief, And Here’s Why It May Work

Besides the realistic cake, the party also had a life-size cutout of Rishi Kapoor that was set for a ‘perfect’ group picture. Doesn’t this remind you of the last scene of Rishi Kapoor-starrer movie ‘Kapoor And Sons’? Take a look: 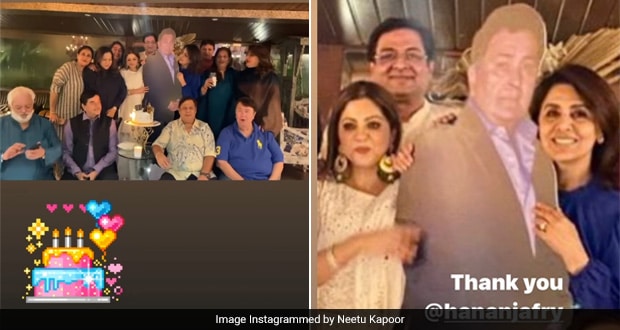 Rishi Kapoor passed away on April 30, 2020, after balling leukemia for two years. He had an illustrated career of almost five decades and was awarded with National Award for his very first film ‘Mera Naam Joker’. ‘The Body’, released on December 13, 2019, was Rishi Kapoor’s last movie, before demise. Rishi Kapoor is survived by wife Neetu Kapoor and two children – Ranbir Kapoor and Ridhima Kapoor Sahni.

About Somdatta SahaExplorer- this is what Somdatta likes to call herself. Be it in terms of food, people or places, all she craves for is to know the unknown. A simple aglio olio pasta or daal-chawal and a good movie can make her day.