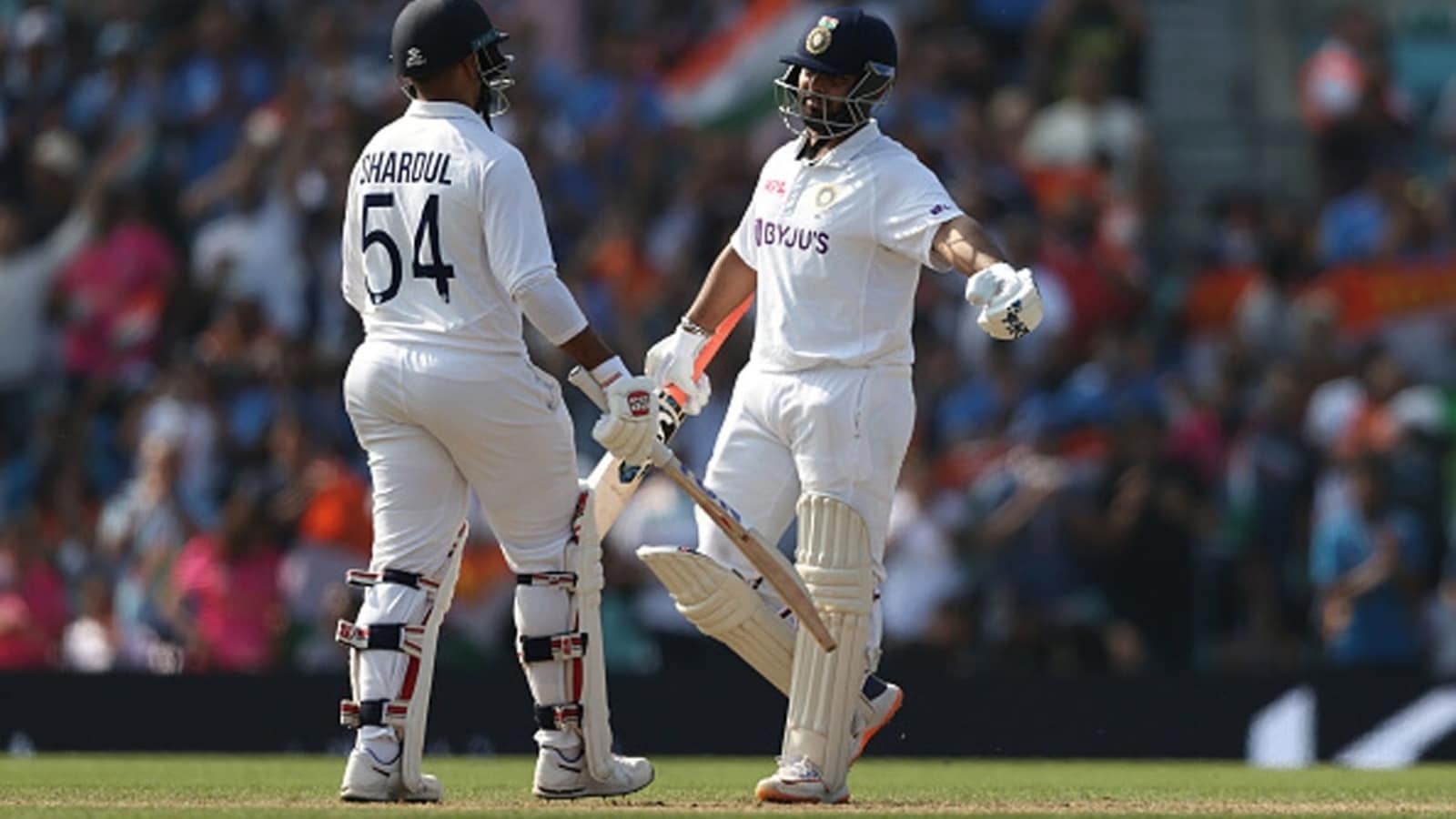 The openers have been brilliant for India. Despite the superb work of Rohit Sharma and KL Rahul, it has been a series with little to separate between England and India. Every run has been a tight contest. It is in this context that the contribution of India’s bowlers with the bat has been invaluable.

In the Oval Test, pace bowling all-rounder Shardul Thakur has made the difference with spirited batting. With his second half-century of the match, during which he added 100 runs for the seventh-wicket with Rishabh Pant, he put India in a position from where they can bid for victory.

After England came back strongly in the first session by prising out the middle-order cheaply, the rearguard effort by Thakur and Pant helped India finish on 466. A target of 368 means England must achieve their highest run chase at home (The best is 362 at Headingley, 2019). At stumps, England were 77 for none. Openers Rory Burns (31*) and Haseeb Hameed (43*) negotiated 32 overs, leaving the hosts to get 291 runs on Day 5.

Though all three results are possible, the odds are against the hosts. There have been only two successful chases of 250-plus at the Oval, and none over 300. For India, the pressure will be on lone spinner Ravindra Jadeja to lead the attack.

The lower-order batting has been a feature for India this series. In the first innings of the first Test, Jadeja scored 56, Jasprit Bumrah 28 and Mohammed Shami 13, to help take the total from 145/5 to 278. The Lord’s Test saw the ninth-wicket partnership between Shami (56*) and Bumrah (34*), taking the total from 209/8 to 298/8 declared.

In this game, it was Thakur’s batting heroics that bailed out India, who went from 127/7 to 191 all out in the first essay. With his team again in a spot of bother, Thakur showed his first innings 57 off 37 balls was no fluke, hitting 60 to ensure India had a 300-plus lead when he fell. In a four-Test career, that’s three match-turning innings from the player nicknamed Beefy by teammates after England’s legendary all-rounder Ian Botham.

With Bumrah and Umesh Yadav also applying themselves, at tea, with the lead 346, the question was when Virat Kohli would declare. It was exhilarating batting with 116 runs scored at a run rate of 4.46 in 26 overs, for the loss of two wickets.

It was the opposite of how the first session panned out. The visitors started the day 171 runs ahead. But England removed three important wickets for 59 runs in the morning to throw the game wide open.

The overnight pair of Kohli and Jadeja started cautiously against Ollie Robinson and James Anderson. But, like in the first innings, Chris Woakes came and started making things happen, claiming a double strike. He broke the partnership when Jadeja thrust his pad to a ball darting in sharply from leg-stump to fall leg before. In his next over, Woakes nailed Ajinkya Rahane. The India vice-captain, low on confidence after being demoted to No. 6 in both innings for Jadeja, tried to turn the straight ball to on-side and missed it.

India were in big trouble 16 runs later. Moeen Ali foxed the set Kohli with a ball that went straight after pitching to have him caught at slip. It was the fourth time in the series that Kohli could not convert a start. In the first innings, he got 50. The off-spinner can claim to have an edge over Kohli. It is the sixth time he has got Kohli in 28 innings.

The onus now was on Pant and Thakur, and the flamboyant left-hander batted responsibly. Thakur was also restrained initially.

An aggressive player, Pant batted in contrast to how he has until now in this series. He reached 25 without a four. His first boundary was off the 54th ball he faced when he gave Moeen the charge to move to 29. The straight lofted hit brought up India’s 350 and took the lead past 250.

Thakur was nicely bringing down the bat straight down on the ball. He kept finding boundaries. Compared to Pant, his 25 had four fours, all delightfully struck. An exquisite cover drive off Moeen followed by a punch straight past Craig Overton, then Woakes was sliced over the infield before a punch off Moeen through cover.

The fifty of the partnership was raised with a single by Pant. The damage had been done with the lead 313 runs.

Thakur caught up with Pant at the score of 38, and moved ahead with a four over square-leg off Anderson to reach 42. On the first ball of the next over, he thumped Robinson over long-leg to move to 49. He reached his half-century, off just 64 balls, by pulling Robinson for a single. The Mumbai all-rounder brought up India’s 400 with a thumping straight drive off James Anderson, repeating the shot off Robinson to reach 60 (72 balls, 7×4, 1×6).

The 100-run partnership was broken by part-time spinner Joe Root. In a replay of Kohli’s wicket, Thakur edged him to slip. Pant fell two runs later after completing a measured half-century. The relief in the keeper-batsman’s body language was evident when he reached the mark, off 105 balls.

Rohit Sharma (knee) and Cheteshwar Pujara (ankle) did not take the field when England batted.